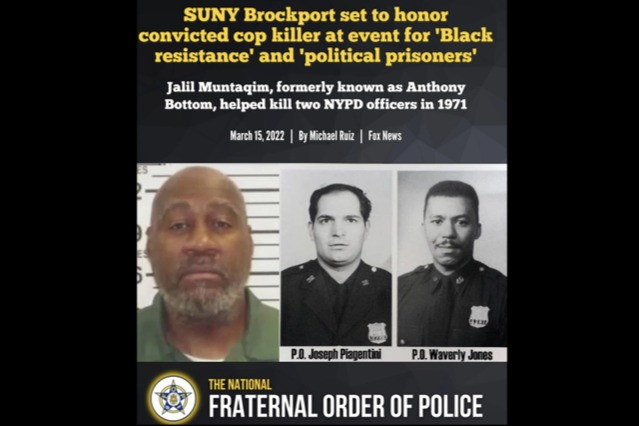 The New York State Fraternal Order of Police strongly states that it is SHAMEFUL that SUNY Brockport has invited a convicted cop-killer to speak under the premise that he is a "political prisoner." Cop-killers must not be held up as moral guideposts for students, especially not at the taxpayers expense. These college administrators should be ashamed !

On Wednesday, April 6th, State University New York (SUNY) Brockport will host the speaking engagement of a person involved in the murder/assassination of two New York City Police Officers. The speaker is Anthony Bottom (AKA Jalil Muntaqim). Bottom was convicted of being involved in the 1971 murders of NYPD Police Officers Waverly Jones and Joseph Piagentini.

Please contact Governor Hochul, Senator Stewart-Cousins, Assembly Member Heastie, your local New York State Assembly and Senate member, and your NYC Council member (if applicable) to let them know that you insist that SUNY Brockport rescind their invitation to a man convicted of killing two New York City Police Officers to speak at their campus. See links below:

You can contact the following to voice your opposition to Brockport hosting this cop killer from speaking at their campus: